Bad wool rising: an interview with the artist, Mark Leckey

A ‘wool’, or ‘woolyback’, is a Liverpool term for those who hail from just beyond the city. When I interviewed the Birkenhead-born, Turner Prize-winning artist Mark Leckey ahead of the 2016 Liverpool Biennial, I was amused by the number of times he used the phrase about himself – hence this piece’s title. I was also greatly entertained by his general affability, the way his work wrestles with nostalgia, and with his admission that he sometimes confuses real life with Grange Hill. 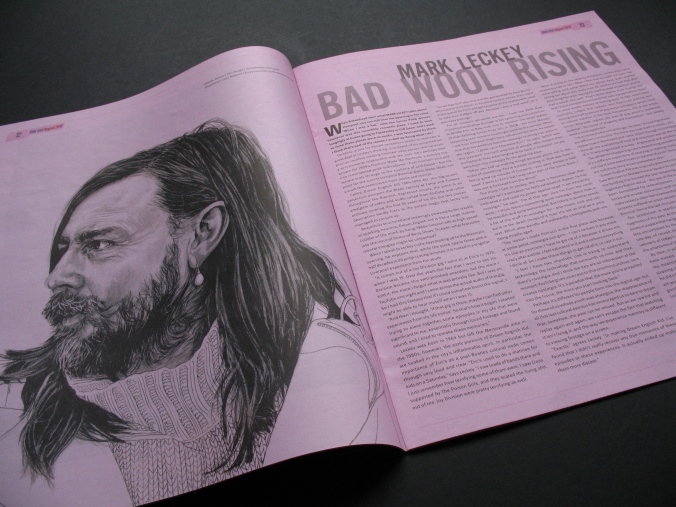 When Birkenhead-born artist Mark Leckey talks about Liverpool, you can still hear the yearning in his voice.

“When I was a kid,” says the Turner Prize-winner, “Liverpool was this incredibly romantic place. I used to look longingly at buses going to Fazakerley or Old Swan, and I used to think these places were so exotic. I was fascinated by them. I think that’s part of the reason I ended up doing what I do.”

Certainly, a lust for distant sensations seems to motivate a great deal of Leckey’s thinking; one strand of his acclaimed art practice involves creating haunted video essays that excavate a very personal relationship with the past. He’s perhaps best known for 1999’s Fiorucci Made Me Hardcore, a sensory trip into remembered youth sub-cultures – from northern soul and terrace scals through to the euphoria of acid house – but his piece for the current Liverpool Biennial distils these ideas into a work that seems even more poetic and intense.

Called Dream English Kid 1964-1999 AD, the big-screen projection occupies the Blade Factory at Camp & Furnace throughout the Biennial. Expressed simply, the piece is an amalgam of video and audio culled from YouTube and other archives covering the first 35 years of his life, but this prosaic description hardly hints at the potent magic that Lecky has managed to conjure up.

Beautifully structured and seemingly powered by the crackle of sparking neurons, Dream English Kid is like a Large Hadron Collider of the mind: by firing 1980s’ Cinzano ads at high speed into the visceral horror of Barry Hines’s Threads, what fearsome mental energies might be unleashed?

When I speak to Leckey in the days leading up to the Biennial’s opening, he explains that while the piece spans three and a half decades in 30 jump-cutting minutes, it is rooted in a singular Liverpool experience from his youth.

“It comes out of a Joy Division gig I went to at Eric’s in 1979, when I was 15. Over the years the fact that I went to see Joy Division became this well polished anecdote, but the more I told it, the more I forgot what it was actually like. But I was on YouTube one night and I came across the actual audio of that gig. So I had this fantasy that if I could somehow boost the signal, I might be able to hear myself when I was 15.

“And then I thought, if that gig is there, maybe I can find other experiences from my life online. So that’s how it began. I started trying to piece together some episodes in my life that were significant to me, essentially through found footage and found sound, and I tried to remake these memories.”

Leckey was born in 1964 but left the Liverpool area in the 1980s; however, the early portions of Dream English Kid are soaked in the city’s inflammable spirit. In particular, the importance of Eric’s as a post-Beatles cultural node comes through very loud and clear.

“Eric’s used to do a matinee for kids on a Saturday,” says Leckey. “I saw loads of bands there and I just remember how terrifying some of them were. I saw Crass supported by The Poison Girls, and they scared the living shit out of me. Joy Division were pretty terrifying as well.

“So we’d go to Probe, buy records, get terrified by Pete Burns who used to work there in his black contact lenses, then stand in the queue for Eric’s and get taxed by all the scallies who used to take your badges off you. Because I was a ‘bad wool’, so it was easy pickings.”

For all Leckey’s art world success – from the 1990 New Contemporaries show through to his upcoming solo exhibition at MoMA PS1 in New York, not to mention the small matter of winning the Turner Prize in 2008 – his inner Mersey-traversing teen remains touchingly close to the surface. When I ask how Liverpool might have influenced his work, he seems sure that his tendency towards nostalgic thinking has roots in the region.

“I grew up in Ellesmere Port,” he says, “which was this Liverpool overspill area full of people who missed their motherland. They were longing to be back in Liverpool, so you were born into nostalgia for the good old days.

“Often you end up making things because you’re not in the midst of something. You’re outside looking in. That was how it felt to grow up outside of Liverpool – you were always a ‘bad wool’. I went to Eric’s but I was never part of the scene there, I was just a dickhead from the Wirral.” 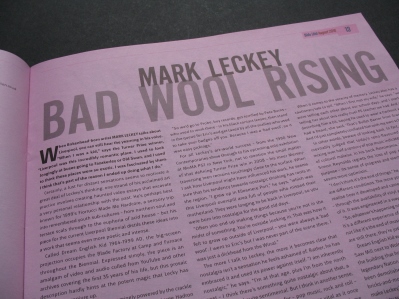 The more I talk to Leckey, the more it becomes clear that nostalgia isn’t a sensation he feels ashamed of. Rather, he has embraced it and used its power against itself.

“I am inherently nostalgic,” he says. “I’m at that age, plus I’m from the north west – I think there’s something quite nostalgic about that, a bit maudlin and quite sentimental. But I think in another sense, a lot of the stuff I’m nostalgic for – pop music, rock and roll – we’re in the death throes of it now. It’s not as vital as it once was. Which also weirdly and awkwardly corresponds with me being middle-aged.

“The reason I made Fiorucci in the first place was because at some point, nostalgia just gets… I can’t contain it any more. It’s like an exorcism, I have to get rid of it because it drives me crazy after a while. I feel saturated in it and it colours everything I think of. So I make these things to get rid of it, to cast it out.

“I feel I have two impulses. One is trying to understand technology, the technology that surrounds us now, and then there’s nostalgia. And I think the two are so interwoven at the moment. YouTube gives us access to this enormous archive, so it creates nostalgia. It’s a paradox that the more you’re propelled into the future, the more you start looking back.”

Perhaps it’s different for people born into the digital age, but for those of us whose youth was analogue, the reappearance of all that lost cultural detritus has encouraged us to dare to dream that somehow, the past can be relived. But as we rewind and replay again and again, we can’t escape the fact that watching it isn’t living it, and the way we experience memory is different to viewing footage on a screen.

“Exactly,” agrees Leckey. “In making Dream English Kid, I’ve found that I didn’t really recover any true memories of these episodes or these experiences. It actually ended up making them more distant.”

When it comes to the veracity of memory, Leckey also has a cautionary tale to tell.

“When I first met my wife,” he says, “we were telling each other about our school days, and I started telling her about this really cruel PE teacher we had. And after describing him a bit, saying he used to wear a tracksuit and he had a beard, she said, ‘That’s Bullet Baxter from Grange Hill’. And I’d just completely conflated him with my own school days.”

In other words, beware of looking back. In fact some have inevitably judged that today’s retro-flavoured picking and mixing over half a century of pop music indicates a certain kind of cultural malaise. In his book Retromania, the music writer Simon Reynolds regrets the loss of pop music’s modernist purpose – its sense of progress and momentum – but Leckey seems more optimistic.

“I don’t think it’s the end of things,” he says, “it’s just that these are different conditions. The more you look back on music, you realise how it developed and came about through technology – through the availability of vinyl and television and all the rest of it. It was engineered in a way – engineered and accidental.

“So whatever’s happening now is determining something else. It’s a different experience of enjoying or making music, but it’s not like it’s the end of music or the end of youth. Those energies are still there, they’re just somewhere else.”

Dream English Kid was originally planned to be shown in the Saw Mill next to Wolstenholme Square in central Liverpool. As the building that housed the last remaining portion of Cream’s legendary Nation venue – the rest of the superclub’s home has been demolished for redevelopment – it would have been a bricks-and-mortar connection with some of the currents that make Leckey’s video feel so powerfully charged. In the event, the property suffered an arson attack a couple of weeks before the Biennial, hence the last-minute transfer up to the Blade Factory.

The symbolism is startling: torched memories, charred fragments of the past. At the Blade Factory, Dream English Kid exists in a space that hangs less heavy with intoxicated memory, less encumbered by the hedonistic spirits of history. Though one day of course, things will be different, and middle-aged veterans of today’s nascent Baltic Triangle will project onto it the phantoms of their youth.

By then, it will be someone else’s turn to dig into archival base metals and transmutate them into enigmatic gold. In the meantime, however, we have Mark Leckey to do it for us, straining cultural sediment through the filter of his mind.

Once, he did it from the shores of the Mersey; now he does it from the art world’s highest peaks. From bad wool to Wirral kid made good, it’s been quite a journey – and I can only hope that Mark Leckey continues dreaming on. 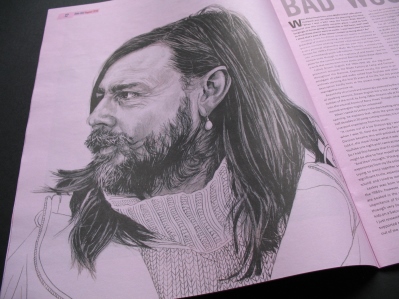 Dream English Kid 1964-1999 AD by Mark Leckey was at the Blade Factory at Camp & Furnace, Liverpool, during the 2016 Liverpool Biennial.