I shout for The Fall: pictures of words by Mark E. Smith, Bury Art Museum

I’ve long been bewitched by the music of The Fall, being particularly intrigued by the way Mark E. Smith’s saliva-slick syllables contribute to the structural integrity of their sound. Following Smith’s death at the beginning of 2018, Bury Art Museum’s I Shout For The Fall exhibition paid tribute to his skeletal words, and I was more than happy to play my part-uh! 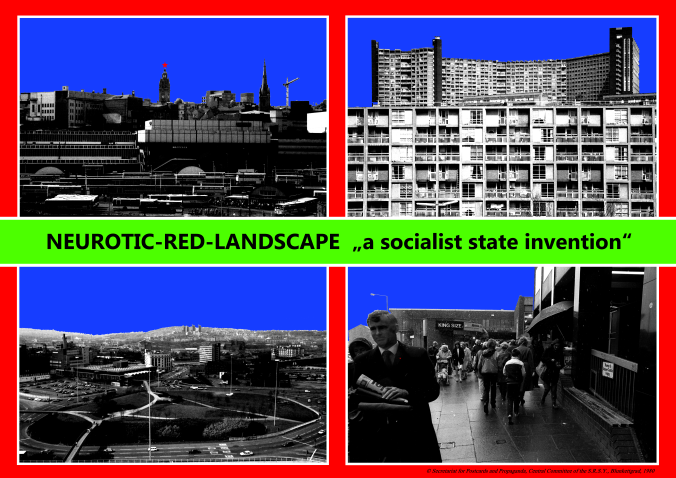 Every Fall fan’s story has a different beginning, but sadly, they all have the same ending. If The Fall’s four decades of hirings and firings made it seem like a band with the regenerative power of Doctor Who, the ever-more-unlikely adventure came to a halt in January this year with the death of the irreplaceable Mark E. Smith.

Except that, this being a musical story, the band can always play on. Not in life, of course, but on scratched vinyl singles and pristine MP3s – arguably the single greatest body of work to have been formed from the exhaust cloud of punk.

And The Fall’s unique spirit lives on in its words too. If the band’s music could seem scorched, barbed, tensile and strange, so Smith’s language had the feel of linguistic nuggets left behind after the grammar and syntax had been burnt away. At their best, The Fall’s lyrics were like verbal nutty slack cast into a varispeed vortex, colliding and deforming as the churning sonics ground them down and broke them apart.

It’s little wonder then that Smith’s words are still rattling round the dark valleys of Lancashire, the ancient regional designation that seems more fitting in this context than the wholly un-Smithlike concept of ‘Greater Manchester’. Between Smith’s Prestwich home and the centre of Bury, it’s likely that when the wind gusts in a certain direction, you can still hear echoes of his stomach-troubling growl and his percussive, poetic yelp.

Perhaps that helps explain I Shout For The Fall, an exhibition at Bury Art Museum that features Smith’s lyrics smashed free from their musical settings and alchemised into artefacts to hang on a wall. Working in collaboration with the Design Manchester festival, over 60 designers and image-makers – not to mention the odd writer who slipped through the dragnet – were invited to choose a single favourite Mark E. Smith lyric and turn it into an A3-sized piece of art.

Contributors include Malcolm Garrett (co-founder of Design Manchester and original Buzzcocks designer), Ian Anderson (founder of Sheffield’s mighty Designers Republic), Jill Mumford (an artist and designer who worked at Polydor Records during the late 1970s), and very many more – from high-achieving artists to the most under-the-radar names.

Ah, those under-the-radar names. Perhaps this is the moment to mention that I have a piece in the show, and to explain how my own Fall story began. 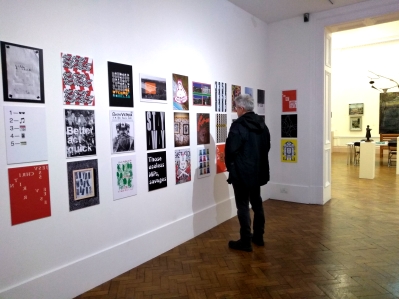 I learnt to love The Fall in 1986, around the time that the civilisation I’d grown up in collapsed. In reality, it wasn’t quite as dramatic as all that, but it was an era of evangelical Tory domination, and Mrs Thatcher had won her battle against errant Labour councils – the Town Halls that chose to spend freely on stuff that sent the free-market-minded mad with rage.

In my home city of Sheffield, her victory signalled the end of super-cheap bus fares, subsidised gigs for unemployed kids and even the flying of the red flag on May Day – things that had made our self-proclaimed Socialist Republic of South Yorkshire feel like an enclave of resistance, a place in which you might have no job, no money, no prospects, but you were still allowed to be young, to get around and have fun.

And it was during those days of defeat that a friend set about educating me in the ways of The Fall – a band I’d long dismissed as too jagged, too concussive; a group that was just too bloody hard to understand. And though it took a little time, his efforts paid off, and before long I was devouring every Fall record I could find.

So when I was contacted recently by a Twitter acquaintance called John Rooney – currently a teaching fellow in design at the University of Leeds – who asked if I fancied contributing to I Shout For The Fall, my thoughts drifted back to those early incendiary moments when every Fall track consumed me anew. I thought about grey English republics and imaginary revolutions, the fag smoke and concrete of home. Without too much prompting, a line from The Fall’s drizzly masterpiece, Pay Your Rates, came to mind: “Neurotic red landscape, a socialist state invention”. 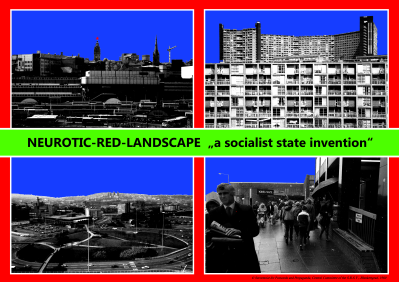 Within a couple of weeks – via some digging through my old photos of Sheffield and a flick through some 1970s East German postcards – I’d created an image with that lyric at its heart. And it’s this piece that now hangs on the wall at Bury Art Museum, just one contribution among many graphic interpretations of the words of Mark E. Smith.

What the great man himself would have made of our efforts is anyone’s guess. He was nothing if not irascibly unpredictable, and could be cheerfully (and not so cheerfully) dismissive of attempts to discern meaning beneath his songs’ oxidised layers. Of Perverted by Language, a 2007 book of short stories inspired by Fall songs, Smith simply said that it was “shite”.

But no matter. His work is now forever in the ether, in the particulates and poisons that we inhale with our morning air, and we’re free to assimilate and metabolise them as we will. And besides, it feels like far more than just a way to celebrate his singular literary talent. It’s also a way to keep the pages of The Fall’s story turning long after the dismal pin-prick of Smith’s final full stop. 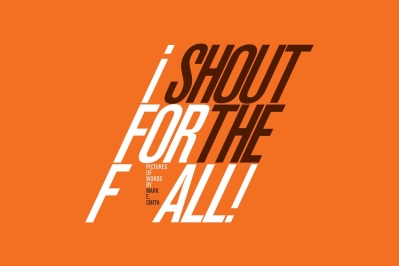 I Shout For The Fall: Pictures of Words by Mark E. Smith was at Bury Art Museum from 22 September until 24 November 2018. Many thanks to John Rooney for inviting me to take part.

This article was originally published by Northern Soul in October 2018.