Sheffield to Tokyo with love: writing for Human Studio

It was one of those briefs: “We’d like you to write something for us but we’re not sure what.” When Sheffield’s Human Studio commissioned me to write the catalogue introduction for their 2015 exhibition, SHEFFIELD>>>TOKYO + <3, I was bewitched by their vagueness. The result was a slice of sci-fi fiction with a time-travelling twist – six scene-setting pages that journeyed into my future and back. No further explanation necessary. Read on… 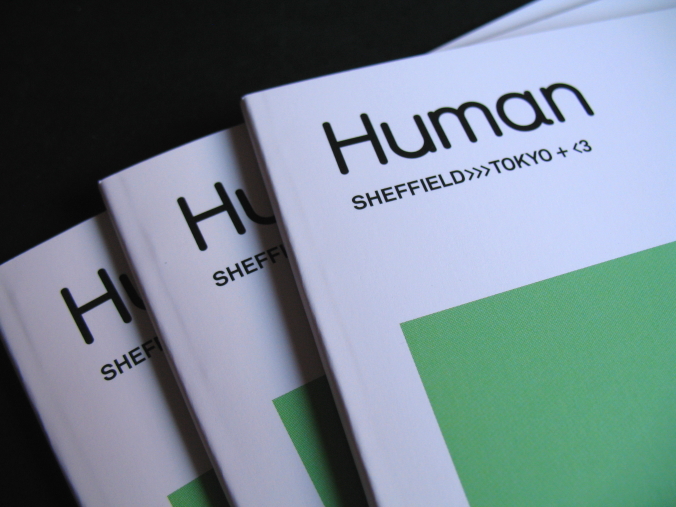 SHEFFIELD>>>TOKYO + <3 is an exhibition of three-dimensional works by Human, a creative team from Sheffield, UK. The objects were modelled using 3D software in their Sheffield studio, and will be sent as digital files to Calm & Punk Gallery in Tokyo where they will be made manifest by a 3D printer.

In preparation for the exhibition, Human commissioned writer Damon Fairclough to explore issues around the exchange of objects between their home city and the exhibition’s location in Japan. As someone fascinated by 3D printing and the potential evolution of matter transference, Fairclough applied to the United Nations Time and Relativity Research Unit in <CLASSIFIED> in order to gain a deeper historical insight into the technology. They allowed him brief conversational access to a future version of himself, and the two Faircloughs were thus able to consider how technology has enabled, and will continue to transform, this exchange.

Here we present three edited transcripts from this conversation. 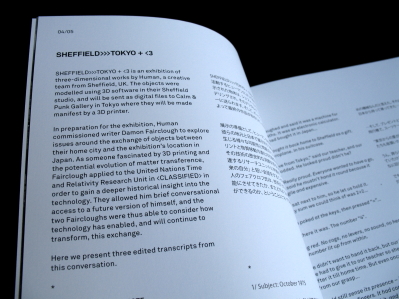 DF#2015: The first thing I’d like to ask is this: do you still remember the first time we were really aware of holding an object from Japan?

DF#2056: Yes. It was the autumn of ’75, and it felt like it had been handed to us from the future. We’d heard of such devices, but never seen one before. Our friend brought it into school to show to the class after his dad brought it back from a trip to Tokyo.

DF#2015: That’s right. Our teacher asked him to stand up and tell everyone how it worked.

DF#2056: He thought she meant he should explain its electronics, and he looked as if he was going to cry. He didn’t know how it worked did he?

DF#2056: But she smiled and said she didn’t want to know its secret. She just wanted him to tell us what it was for.

DF#2015: And he laughed and said it was a machine for doing maths. It was an electronic calculator. His dad had bought it in Japan…

DF#2056: …and brought it back home to Sheffield as a gift. On an aeroplane. In his suitcase.

DF#2015: “With love from Tokyo,” said our teacher, and our friend nodded. He looked proud didn’t he?

DF#2056: He did. Really proud. Everyone wanted to have a go, but she said he mustn’t hand it round because it was fragile and expensive.

DF#2015: And we didn’t want to hand it back, but our friend said he had to give it to our teacher so she could look after it till home time. But even once it was gone from our grasp…

DF#2056: …we could still sense its presence – its plastic form beneath our fingers. It had come from Tokyo to Sheffield, and we’d held it, and would remember how it felt for…

DF#2015: So… this is where it gets interesting. Because I need to ask you about something that hasn’t happened to me yet… but which is in your past.

DF#2015: Nick Bax from the Human creative agency has been talking to me about an exhibition project that makes use of a 3D printer. Do you remember when you… we… first saw it working?

DF#2056: Of course. It was like a ghost drawing in space – though we knew it wasn’t a transmission from the spirit world.

DF#2015: No, not from the spirit world. A transmission from Sheffield…

DF#2015: Nick showed us the machine when we visited the Human studio…

DF#2056: …but we didn’t see it working that day. He didn’t turn it on. He described the process though didn’t he?

DF#2015: He did. And as he spoke, we gazed at the machine – a MakerBot Replicator – and we tried to imagine it sketching objects in the air.

DF#2056: I remember that we said the mechanism looked a bit like a 3D Etch-A-Sketch, which made Nick laugh. He said it sort of worked the same way.

DF#2015: Yes, but we still felt a little stupid. As if we wanted to delete our comment and backspace through time.

DF#2015: So what did we think when we first saw the machine working at the exhibition in Tokyo?

DF#2056: We thought we’d stepped into the future. Just like when we first saw…

DF#2056: Exactly! We watched the objects appear in space – objects that had been imagined by the team at Human in Sheffield, and modelled on screens, and sent as code across continents. We thought they looked like detritus from the workings of the universe. Some looked crystalline, others seemed to have tumbled out of the cosmos. They felt solid, yet they were made from the DNA of an idea.

DF#2015: It sounds like a significant moment. The beginning of a new way of sending thoughts, ideas, as physical objects.

DF#2056: Yes, I remember thinking at the time that this process – this ‘printing’ in three dimensions – was the beginning of something that would alter everything. Transform people’s lives. But I can see now that it wasn’t the beginning. It was just an exchange that had been going on for…

DF#2056: Yes, many years. It did transform lives though. It transformed ours. 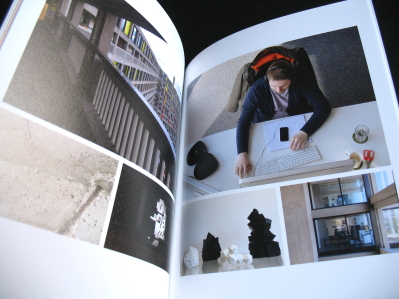 DF#2015: The technology must have developed so quickly from that point. Can you tell me how it felt when…

DF#2056: Of course! I suppose the thought originally occurred to us at that 2015 exhibition in Tokyo.

DF#2056: That’s right. It developed surprisingly quickly – really, you’ll be amazed. There was a big breakthrough about a decade ago when they ran a successful trial using ArtiDerma specimens.

DF#2056: An artificially reared organic substance that can mimic a variety of human internal systems. They use it in medical research. They managed to transfer the specimens from one building to another about a kilometre away.

DF#2056: There were minor mutations, but it was big news. A huge achievement.

DF#2056: The system was in beta testing for five or six years, but it’s been available commercially for just over a year now. We signed up for one of the first transmissions in October 2055.

DF#2015: Have you ever tried to describe it? The actual moment?

DF#2056: Not out loud, though I’ve thought about it often. It was like… a peeling apart. As if our soul had been sliced in half.

DF#2056: It was thrilling to get the chance, obviously, but in many ways it wasn’t actually very dramatic when the time came. We entered the booth, gave the lockdown command, heard the seal engage…

DF#2056: Very. But bearable. And then the operator initiated the scan. There was a beam of light that travelled over our body – it took a couple of minutes – and a DNA probe that scooped cells from our mouth. And there was a pause – and then it happened.

DF#2015: And this really happens? In our lifetime?

DF#2056: Well… yes. You’d be surprised how normal it now seems from this perspective. Everyone’s doing it. It’s by far the easiest way to travel.

DF#2056: Usually. Our fingernails went missing during the transfer, but we can manage without them.

DF#2056: I’m sure it does. But that’s what happens with technology. The unimaginable becomes commonplace.

DF#2015: From printing objects in space…

DF#2056: …to sending the human body across the globe in an instant.

DF#2015: One endless sequence. From Sheffield. 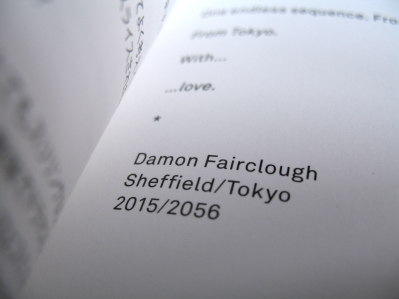 Many thanks to Nick Bax and the team at Human Studio, Sheffield, for commissioning this piece.