Sweating together: fiction and photos from Wembley, April 1993

FA Cup semi-final, April 3rd 1993. When Sheffield United faced Sheffield Wednesday across Wembley’s Wide Open Spaces™, there were those in the crowd who felt… ‘stirrings’. But whatever will be, will be. Short fiction and photos follow… 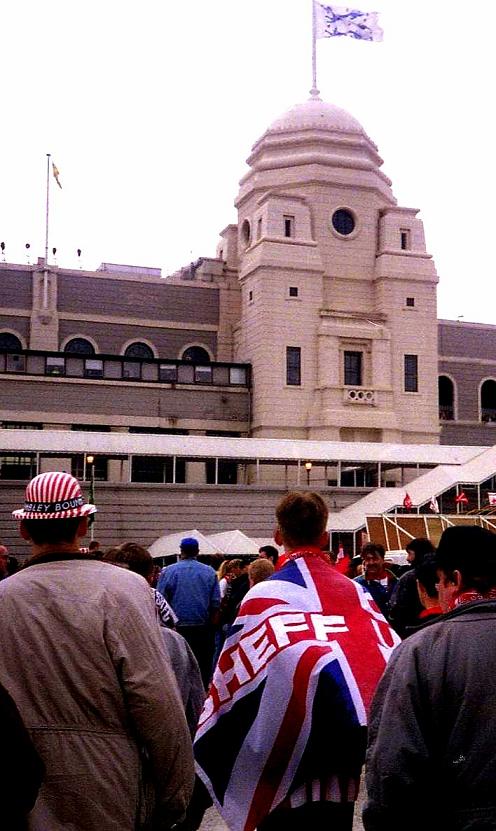 GRAEME HAS ONLY ONE TRUE LOVE – A FOOTBALL TEAM FROM HIS HOME TOWN. HIS PASSION FOR THEM IS BOUNDLESS, A PASSION WHICH BEGAN TO CONSUME HIM ON THE FIRST DAY OF A NEW DECADE…

It were New Year’s day 1990, and I woke Maureen up with a cup of tea and some Frosties. That’s Maureen – my ex-fiancé. It were afternoon by then ‘cos we’d been out on the beer the night before. At Tom’s – he always throws a good shindig for New Year.

Me and Maureen, we’d done Auld Lang Syne together, kissed, had a bit of a cuddle, then Mark Alsop had collared me about his lagging. He says his loft wants laying over with fibreglass and he knows I do a bit of that so we have a chinwag, and we get onto old times.

We go back a bit do me and Mark – I first met him in the Juvenile Pen at Bramall Lane. It were a couple of weeks after the Boxing Day Massacre of ’79 when Wednesday beat us four nowt, and he told me he knew where there were going to be a fight after the match. We went off to join in, but it turned out it were just his Grandad arguing with a woman off the knickers counter at Debenhams about whether or not our left back ever wore women’s clothing.

About three o’clock in the morning I found Maureen talking to Lisa Murphy in the porch. I says, “Come on love, we’d best be off,” but she just bursts into tears, arms round Lisa, face all puffed up like a poppadom. Lisa looks at me and says, “It’s girls’ trouble. You know. She’ll be OK.” I just thought she meant it were her water works playing up, so I left it at that.

So anyway, New Year’s day, afternoon, she takes a mouthful of Frosties and I’m trying to find Grandstand on the portable when she says, “Graeme, you know we promised to tell each other… if we’d ever been unfaithful?”

“No,” I said, because we’d never promised that at all. So she says, “Well, supposing for a moment that we did. What would you say if I told you I had in fact been unfaithful?”

I took a sip of my tea and she carried on.

“Because last night, while you were talking to Mark, I was unfaithful with a man from Brighton.”

“A southerner! You had it off with a southerner?”

“So how is that unfaithful?”

She says, “As far as I’m concerned, if you’re willing to let a complete stranger put his tongue in your mouth then you’d let him do anything else, and I feel it marks the end of our relationship. I no longer feel able to love you Graeme. My passion for you is quenched.”

So that were that. 1990 says hello, Maureen Beardsley says goodbye. Gave the ring back, crossed my works number out of her address book and her dad came round in his Land Rover and emptied the whole bloody flat.

It were then that I realised our marriage were a sham. I realised it were never going to work – not while there were three of us sharing the divan. Because all that time we’d been playing at Mr And Mrs, there hadn’t been a day that had passed without me yearning for the sweet caress of that beloved red and white polyester shirt.

And four years on I’m sure that this is The One. Friends ask how I’m coping without the humping – but I just smile and shake my head. I mean, these are people who’ve never stood on the open away end at Nottingham Forest singing,

And they’ve never known the delirium of equalising at Wembley. I’ve experienced so much in four shag-free years – I’ve been lost within the turmoil of promotion and I’ve been sinking as the team’s faced relegation. High up on Hillsborough’s West Stand I’ve danced with the delight of a derby double, and with two men sent off at Oldham I’ve sung,

At times like that, times of emotion and love so intense, my thoughts run away and I’ll tell them about that day… April 3rd 1993… playing Wednesday at Wembley in the Cup. I’ll tell them how I saw Alan Cork’s bald sheen, his lumbering strides, the stripes on his shirt blurring into a single pink streak… there were defenders diving in, but somehow they couldn’t get near, and there were only Wednesday’s keeper to beat… and even wearing size fifteen boots that suddenly seemed to be made of lead he got round the keeper and scuffed the ball so agonisingly slowly. I wanted to waft it along like the old fellers do at bowls. Would it roll in? Would it reach the net? Chris Waddle were storming in to clear it and he slid feet first and I were sure he were going to reach it but…

THERE IS A PAUSE AS GRAEME WATCHES THE BALL CROSSING THE GOAL LINE THEN HE MIMES THE GREAT MOMENT AGAIN, PUNCHING THE AIR, SCREAMING HIS JOY TO THE SKY. HE RUNS BACK AND FORTH WITH HIS ARMS OUTSTRETCHED MIMICKING THE PLAYERS THEMSELVES, THEN COMES THE POST-COITAL MOMENT – THE SAGGING OF THE BODY, THE HEAVY BREATHING AND HE LOOKS AROUND WITH A DEGREE OF BEWILDERMENT IN HIS EYES. BUT HAPPY, OF COURSE.

Then exhaustion, panting, clutching at mates, sweating together and ready to collapse. And I think to myself, “Oh Sheffield United, come thrill me again.”

Which makes it a pity they fucking lost. 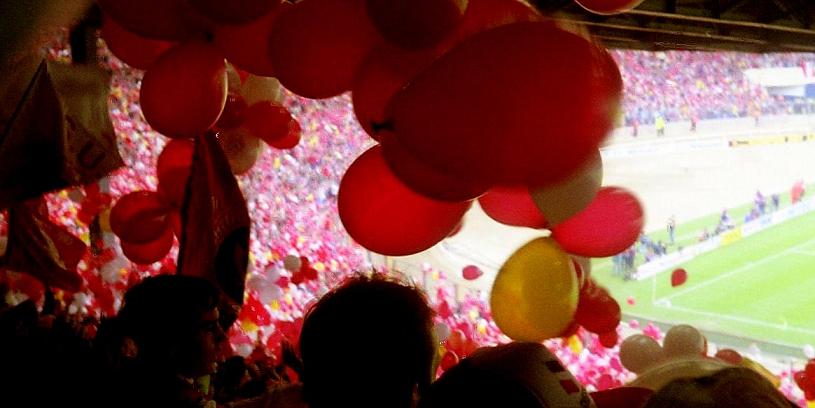 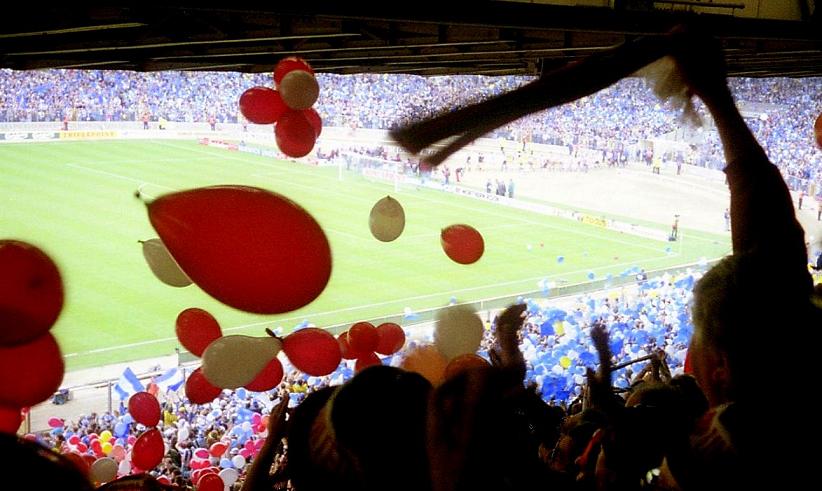 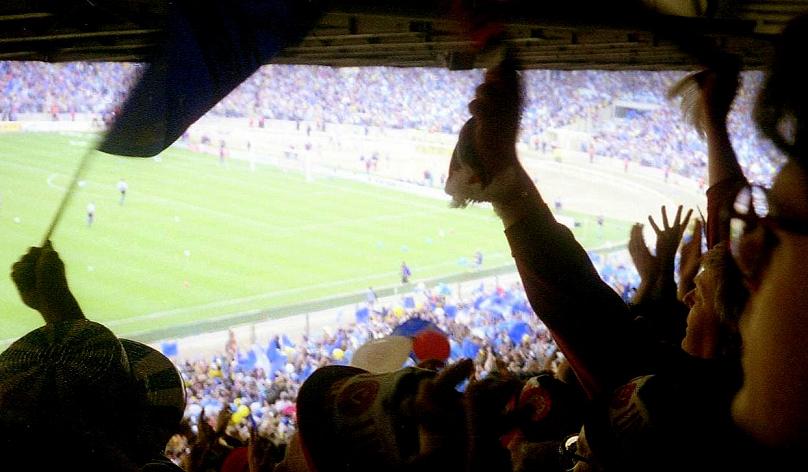 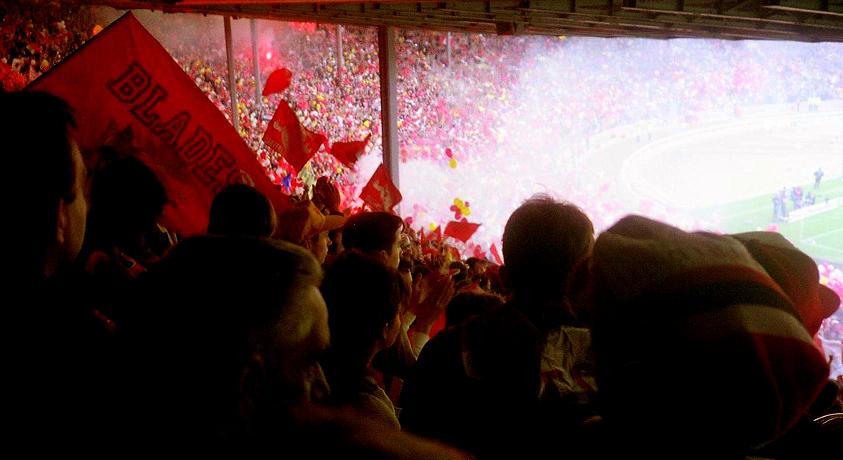 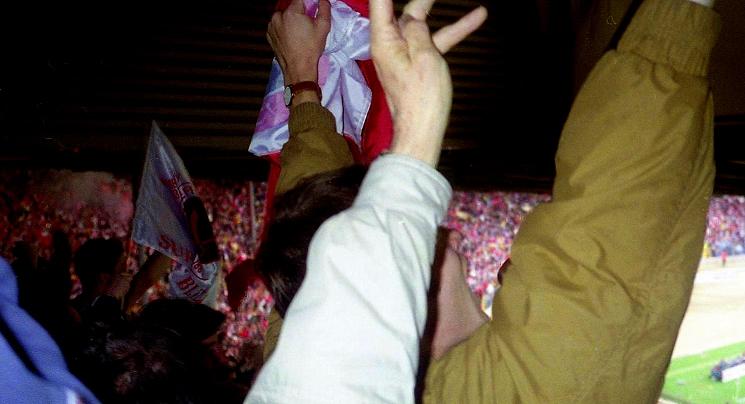 This piece was originally performed as part of Sex In The 90s, Crucible Studio, Sheffield, 1994.