They drove an ice-cream van: a look back at Bill Drummond and Jimmy Cauty’s Welcome to the Dark Ages

At 23 seconds past midnight on 23 August 2017, the Justified Ancients of Mu Mu trundled down Bold Street, Liverpool, setting in motion their Welcome to the Dark Ages event. A few months later I unpicked a few loosely woven memories for Bido Lito magazine. 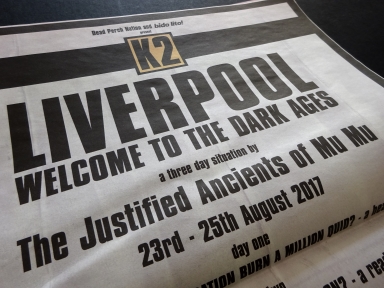 Where were you when the news came through? Not about North Korea and its nukes or about Theresa or Trump, but about The Justified Ancients of Mu Mu and their extraordinary ice-cream van?

Did you see it on breakfast telly? Did you catch it on Radio Four’s Today? Or did you settle back for the in-depth analysis via the heavyweight Channel Four News?

“Warning: there is uninhibited discordianism throughout this report,” the news anchors didn’t say, but perhaps they should have done. It would have alerted the watching mainstream millions that things were about to get strange.

Because despite the Twitter whispers and Facebook chat that kept certain corners of the internet guessing throughout 2017, it was the appearance of a customised Mr Whippy wagon trundling down Bold Street that was most people’s first sighting of The Justified Ancients themselves – or The JAMs, or the duo formerly known as The KLF.

For five barely believable minutes, Britain’s most prestigious prime-time news vendors reported on the arcane signs and symbols surrounding this inexplicable midnight event. With up to 500 people queuing to get into a radical bookshop in Liverpool to buy a new novel called 2023, and the authors – the two members of what was once, briefly, the nation’s biggest-selling band – refusing to explain what any of it was about, there was clearly a story to be told.

But when they cut back to the studio, the expressions on the presenters’ faces said it all. Via the odd raised eyebrow and a quizzical smirk, they all said, “What the fuck is going on?”

For most, that was the beginning and end of the story: a book launch stunt that revived memories of rave tunes and money burning, of a time when dance music was at its unruliest height.

But for Liverpool it was just the beginning, the precursor to three days in a discordian dream.

The guessing and gossiping had begun earlier in the year when a couple of cryptic flyposters and a little social shit-stirring helped seed the notion that Bill Drummond and Jimmy Cauty – two artists with a knack for seizing the means of pop culture’s production and recalibrating the controls – would be leading three days of something-or-other in Liverpool.

Whatever it was, it would be called Welcome to the Dark Ages, and if you wanted to take part, you had to pay a cool £100. Which is exactly what 400 people did.

Perhaps the details of what happened next should remain the property of those who took part, in which case we must let them tell their tales in their own way. But by the climax of day three, the self-generated sorcery succeeded in breaking through from their world into ours as a parade of cagoule-clad, grease-painted accomplices dragged that ice-cream van from Toxteth up to the North Docks where a pyramid-shaped pyre was set alight.

And then they watched it burn: Bill Drummond, Jimmy Cauty and 400 flame-flecked co-conspirators who looked astounded at what they’d done.

In some towns and cities, Welcome to the Dark Ages might be remembered as the most extraordinary event that anyone could ever recall. But in Liverpool – the city of Henri’s happenings and Campbell’s capers – it almost seemed like business as usual, just another poetic rearranging of reality’s over-familiar face.

Which is why the event’s legacy – a promised annual Toxteth Day of the Dead and a People’s Pyramid filled with the ashes of the dearly departed – should fit in just fine among the football grounds and alley ways, the cathedrals and the Mersey-scented streets.

And frankly, if you saw the van’s halting voyage along the waterfront on that late summer Friday, with its scally outriders and shadows in the shape of the police, it doesn’t matter where you were when the news came through.

It’s what you do with the memory that counts. 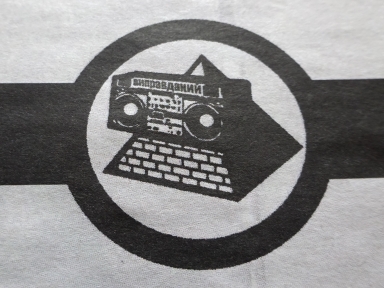 This article originally appeared in the Bido Lito Journal, published in December 2017.

Prior to the event, despite not having much of a clue about what was going to happen, I previewed Welcome to the Dark Ages for Bido Lito magazine. You can read that article here.