Brutalism, bus fares and The Box: photographs and music from 1980s Sheffield

These days, it’s Sheffield’s Park Hill that gets all the concrete-loving plaudits, but for sheer brute strength you couldn’t beat the adjacent Hyde Park flats. They may be long gone but they live on in my photo from 1987 – and, as detailed here, on a CD compilation by lost Sheffield band, The Box. This article from 2014 reveals the bigger picture. 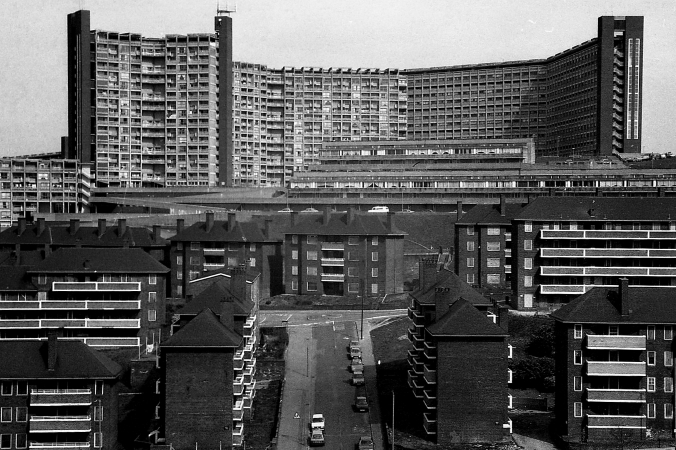 Think of the camera’s shutter as a scalpel. See the photograph as a slice through time.

When I stood on the bridge above Sheffield’s Park Square in 1987 and wielded my Canon AE1 like a knife, I thought of myself as a surgeon performing an exploratory dissection. My patient was the city: I’d grown up in the comforting crook of its arm – where it was freckled with handsome stone houses and dimpled with parkland and woods – but standing aloft on a web of post-war pedestrian walkways, I found myself looking deep into its stammering grey soul.

I wanted to investigate the Sheffield that had scars on its face, that had tears in its eyes. So I pointed my camera and pulled into focus a cross-hatch of chimney pots and street lights, and with the steadiest of hands and the swiftest of cuts, I skimmed off a specimen to take back to the lab.

Only it wasn’t a lab, it was a darkroom; it smelt of vinegar, and its lighting was the colour of blood. Hiding in the gloom of its haemal glow, I rocked a plastic dish filled with liquid and watched as the image began to emerge.

Arrayed across the front of the photograph was a brick-built estate of three- and four-storey flats; they seemed to huddle together for warmth, their pitched roofs jammed on like bobble hats, their balconies wrapped like mufflers round their necks. They stood guard in front of concrete decks and distant breeze-rattled windows, but though they scowled and muttered and did their best to intimidate, my attention was soon dragged elsewhere.

Because rising over the horizon behind them was an architectural beast, a deck-access demon doing its best to block out the sky. There it stood in the centre of the scene, beating its chest in a fit of municipal madness and pride. Though inescapably modernist in conception – it had come to cleanse Sheffield of its despicable slums – it was medieval in its effect. It was like a fairy-tale ogre, declaring its presence and demanding respect, and I could almost hear it bellowing its name. Vengeful and friendless, this was the 1960s housing scheme known as Hyde Park flats.

But even as I worked on my photographic biopsy, I felt that really, I wasn’t getting close to the truth. I may have extracted an image of a corner of town, but a monochrome photograph of some buildings couldn’t communicate the spirit of the age. The Sheffield I saw in that picture was far bleaker than the one in which I lived. I knew the city was stumbling, but I felt as though I’d killed it via an overdose of black and white. In the picture in my hand, the city’s colour was drained, its energy sapped, and its music was nowhere to be heard.

Everyone knows Sheffield’s music don’t they? A scene that electrified the 80s? Analogue, angular and analgesic, it was a synth-driven thrill prescribed to ease away industrial pain. That’s the narrative these days of course, but the reality was more complex than that.

Take The Box for example. True, they’d formed amid the effluvia expelled by the exploding Clock DVA – a band that had released its 1980 cassette album White Souls in Black Suits on the aptly-named Industrial Records, and who represented, along with Cabaret Voltaire, a pumping heartbeat that seemed centred on the Don Valley itself. But the four musicians who fused together post-split in 1981 – Charlie Collins, Paul Widger and Roger Quail from Clock DVA, plus new bassist Terry Todd – had something more primal in mind. They would be stripped back and hard edged, sure, but also gutteral and organic.

Or perhaps they never planned anything in particular. According to sax player Charlie Collins:

“The ‘original vision’ was to simply carry on as we had been doing, almost as if nothing really happened… sound-wise it was the same, business as usual.”

But with the addition of vocalist Pete Hope, who travelled 160 miles with his young family to join the group, they found their simmering brew being gulped down by an expectorant bluesman who could hawk up a growl that channelled the Mississippi via Middlewood; he anchored The Box to a very human yelp of emotion. These weren’t drop-forge beats; it wasn’t pop-frenzied pouting. This was swamp-powered, sax-tainted, sweat-soaked soul built on subsidised bus fares and cheap beer.

By 1987, when I took that picture of Hyde Park flats, The Box were already part of Sheffield’s past. They’d gone out in a glorious blaze at the Leadmill in January 1985, with the posthumous live album Muscle Out forming their last will and testament.

But this tale has a twist, because almost three decades later they have uncaged another audio beast – a compilation of mid-80s tracks originally recorded for Cabaret Voltaire’s Doublevision label, called @Doublevision. And on the CD’s cover is a photograph that seems more than familiar. While Hyde Park flats may be over 20 years dead – the massive hilltop crescent was demolished in 1990, leaving just two smaller refurbished blocks – the picture that I’d found unsatisfactory in ’87 now forms the skin of this reawakened brute. 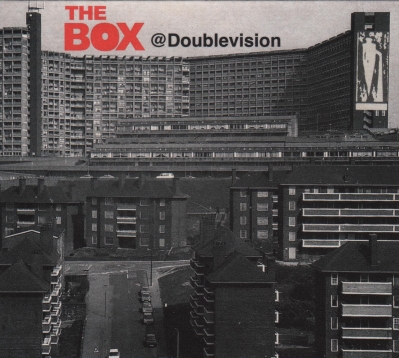 Pete Hope had seen my photograph on the internet along with others I took the same day, and emailed to ask if it could form the cover of the new CD. As he explains:

“The photographs are the Sheffield I knew at the time. The flats at Kelvin, Hyde Park and Park Hill all loomed over the city like a testament to a future ideal that had forgotten people – pile ’em high and sell ’em cheap.”

But maybe I was wrong to have diagnosed only bleakness in the picture. After all, those buildings – “oddly attractive in their ugliness,” according to Pete – were simply a backdrop to a distinct form of life.

“I thought Sheffield was great,” says Pete. “It was anarchic and alternative, and a socialist haven amidst the great blue sea of greed.”

This was the stage set on which dole-bound musicians and artists and writers could hide, moving in and out of the public glare as fashion and commerce dictated, in defiance of the easy narratives that we may now try and impose on Sheffield’s musical past – whether that’s as the birthplace of electronic pop or as a furnace fuelled by industrial noise.

“The scene as I saw it was pretty vibrant,” says Pete, “but The Box never really saw themselves as a purely Sheffield band.”

As Charlie Collins puts it, “I don’t think we were really aware of a Sheffield musical reputation that we had to perpetuate; it was simply what we did, how we heard it. For a while I’d been using a lot of delays and effects, and when I ditched those the sound simply opened out, became more transparent. As for the way we were being presented in the media, I don’t think it mattered that we hadn’t got synths (seemingly the pre-requisite for being a ‘Sheffield band’) – or even long raincoats. We were still considered experimental.”

The new compilation has been a labour of love both for the band and for Klanggalerie, the Vienna-based label on which it’s released. Pete describes Walter Robotka of Klanggalerie as, “a real fan of the 80s Sheffield scene. He’s got the love, a rare commodity.”

With six searing tracks all originally recorded at Cabaret Voltaire’s Western Works studio, plus a series of dubbed-up remixes by Richard H. Kirk and three sparkling demo versions, the package is a potent relic of the Sheffield that existed beyond the industrial myth.

To revert to my original analogy, it’s a slice of time, just like the photograph. The band members have moved on, the flats are demolished, the sense of South Yorkshire as a fortress buttressed against Maggie’s attack can be discerned only in the echoes of tales still told by people who were there. But though cities alter and lives change, the landscapes in which we grow can exert their grip long after the tectonic plates have shifted.

Pete Hope and Charlie Collins are both still deeply immersed in music, and like the uncompromising cliff-face of Hyde Park flats, they’re in no mood for populist surrender. Having left Sheffield in 2002, Pete is currently in New Zealand, his Wrong Revolution project flinging out cassettes, vinyl and downloads with the ferocity of a seditionist hurling rag-stuffed milk bottles. Charlie remains in Sheffield, now a dynamic percussionist on the city’s free-jazz and improv scene. His reach is global. As I write, he’s recording an album with komungo player Eun-Jung Kim, and working on an experimental project with Ryoko Akama from Japan.

And as I let The Box create a commotion in my ears – a sound resonant with my remembered city of subways and struggle and under-age pints – I realise there’s an inescapable pride in the depths of my palpitating heart.

In an attempt to salvage a specimen of my city, I took a photograph. It wasn’t the full picture, but now that it’s fused to the delirium of The Box, it doesn’t seem bleak any more. Now I can hear its colours too, and remember the excitement behind the cement.

This isn’t just a memory of a great Sheffield group, I decide. 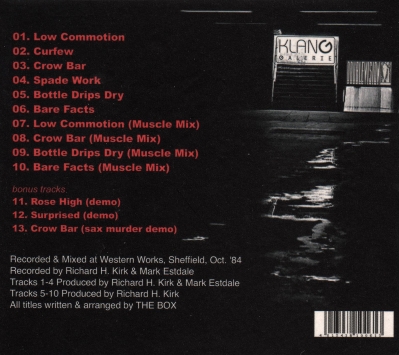 The Box live at the Haçienda photograph © Klive Humberstone

@Doublevision is available on CD from Klanggalerie and as a download from Bandcamp.

Thanks to Pete Hope, Charlie Collins and The Box.

This article was originally published by Northern Soul in October 2014.